As I’ve said many times before, I’m an audio book addict.  Listening to a book has become my standard entertainment while driving or working on some simple task that would prevent normal reading or watching something.  Audio books are the fastest growing market and frequently I’m asked which ones I’d recommend.  So here’s a list of my most regularly recommended audio books and why.

I was fortunate enough to have read this book right when it was released and I instantly fell in love with it.  After hearing about the audio version, I gave it a shot and it did not disappoint.  It features a spectacular cast including Alan Alda, Mark Hamill, Henry Rollins, and many, many more.  It’s absolutely wonderful.

The only gripe I have about the book is that it is abridged.  The version that I originally listened to (many times) was made in the time just before streaming and MP3 downloads made abridged audio books a thing of the past.  When the movie came out, it was decided that they would release a full-length version with all of the missing stories (this is the only positive thing I will ever state about the movie).  It’s a dramatic improvement, however, while the additional stories are unabridged, the small abridgments that were made to the stories that were in the original recording are still there.  This does disappoint me, but the audio book is still amazing and it’s often the first one I recommend to anyone wanting a great listen.  Mark Hamill’s performance is my favorite. 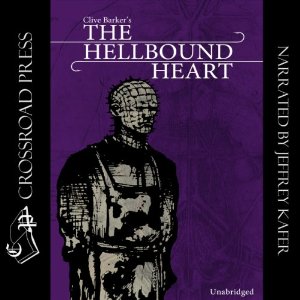 This is another one that I had read years before I tried out the audio book. After a Hellraiser marathon, I decided to revisit the original story and picked up the audio edition.  Jeffrey Kafer nails the performance and I especially loved the effect they added to the cenobites’ voices.  It’s an extremely short listen, but really packs a punch. Because it’s so short, it has also become one of those old stand-by books I save for when I need something to hold me over for just a couple hours.

The Silence of the Lambs

I’d seen the film version of this story countless times and was interested in checking out the original book.  When I saw that Frank Muller (my absolute favorite narrator) had performed it, it was instantly in my Audible shopping cart.  This audio book is amazing.  I can never ever praise Muller enough for his voice and timing, and the novel itself is brilliant.  One fun feature to the audio book is an introduction read by Thomas Harris where he tells a story of meeting the doctor that inspired Hannibal Lecter. Great stuff.

The Lies of Locke Lamora

First, I have no idea what’s up with that cover.  Lies of Locke Lamora has had some beautiful covers, but the audio edition looks like it was designed by Timmy over in Accounting.  Bad covers aside, I love this book.  I wrote an entire blog post about how much I love this book.  It’s amazing and Michael Page does a fantastic job performing all the characters and accents.

This is one of those cases where a narrator took a great book and made it even better. Ready Player One is brilliant and funny.  It’s the ultimate ode to nerd and 80’s pop-culture. And who did they get to perform it? Wil “Nerd Lord” Wheaton. He was the perfect choice for this book and Wheaton nails this performance so well that I could never imagine anyone doing a finer job than he did. 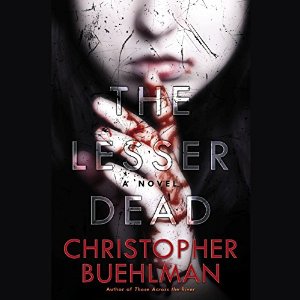 Set in 1970’s New York, The Lesser Dead is a beautifully written vampire novel.  It’s scary, dark, and incredibly entertaining. The audio book was performed by the author. Now, normally I’m not a big fan of author-read books. Authors might be able to craft a brilliant story, but an audio book requires a brilliant performer. Christopher Buehlman is both. His character voices and accents were masterfully done and The Lesser Dead has been my absolute favorite book I’ve read in 2016 so-far.  Horror fans should definitely give it a listen.

There isn’t much that can be said about this book that hasn’t been said already.  It’s earned stacks of accolades. It’s fun and highly entertaining. R.C. Bray deserves every single bit of praise that he’s received for it.  I honestly prefer his version of stranded astronaut Mark Watney over Matt Damon’s movie performance. Damon did a fine job, but to me he felt like Matt Damon surviving on Mars. Bray’s performance made Watney feel like a real guy.  I will confess I may have a teeny-tiny bit of bias because Bray performs my own books, but that still doesn’t change a damned thing when it comes to how great this audio book is. Listen to it.

The Girl With All The Gifts

This novel beat Dämoren for Best Paranormal Audie Award, so it had one strike against it when I began it. It quickly won me over. Finty Williams’ performance is wonderful. She gives the perfect amount of whimsy to Melanie’s voice and just the right sinister edge to what happens as the story progresses. The movie version will be coming out soon, so I recommend you check out the audio book before it does.

This book gets the Super Bonus Category because it’s no longer being made.  I scored my copy years ago and I’ve listened to it more times than I care to admit (Hint: It’s over 10). It was my first exposure to Frank Muller and his performance of this novel is what propelled it from “Pretty Good” to “Holy Crap This Was Amazing!”.  While a brilliant storyteller, Gibson’s writing style is sometimes difficult for me to follow. Muller grabbed onto the dreamy prose and ran with them. While a decent cyberpunk novel in near-future San Francisco, Muller’s performance is why I always recommend this book and why I’ve listened to it as often as I have(Hint: It’s over 15 times).  If you can find the Frank Muller version of Virtual Light you should do yourself a favor and jump on it.

Mountain of Daggers (Tales of the Black Raven, #1)